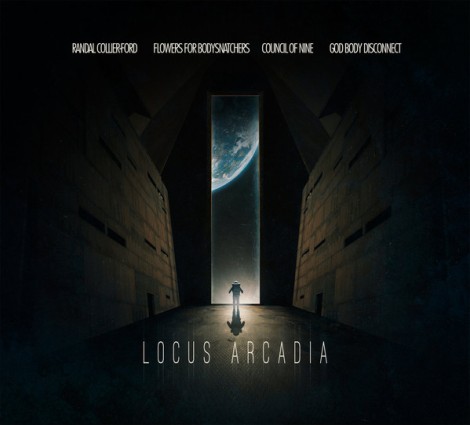 Look at the cover. The names of the participating artists and projects look like the names on the movie poster. A sci-fi flick, not exactly a blockbuster, but not indie either. Still close to the B-category, R-rated, dark, mysterious, but not making an idiot of the audience. Still waiting for such a movie. There were some in the 80s or 90s, like “The Dark Side Of The Moon” for example, but in their vast majority they didn’t withstand the test of time. “Event Horizon” someone might say… nah, too flashy. Eventually I felt disappointed. Lately I have to admit that “Interstellar” had its moments, but you felt it was a blockbuster and its few interesting ideas drowned in the sentimental mumbling and pathos which Nolan loves so much. Also a few fragments of “Europa Report” were more than promising, but it was still not exactly what I expected, “Gravity” was visually stunning but not much more. There’s this new movie with Chris Pratt and Jennifer Lawrence coming, “Passengers”, but come on, Chris Pratt? I mean I loved the guy in “Parks and Recreation” and “Guardians of the Galaxy”, he was hilarious there, but I can’t imagine him in an “adult” flick – it seems like a romance in a sci-fi entourage. Maybe someone will bring Peter Watts’ “Blindsight” on big screen one day? Yeah, dream on, Przemek.

So for the time being we have an ambient surrogate of the movie I’m waiting for, “Locus Arcadia”: a story about an astronaut exploring an abandoned space station. What can he expect? Monsters like the ones from Nostromo, or perhaps the ones closer to computer games in the vein of “Doom” or “Dead Space”? An Artificial Intelligence that has turned against its creators, the human race, like in the “System Shock” game? Maybe something literally beyond his level of comprehension, something he can’t even imagine in his most surreal dreams? He punches in the code and enters the station.

And this is where Randal Collier-Ford takes the story under his wings. Deep, low-frequency drones are the necessary background. It’s an aural equivalent of the lack of light – natural or artificial, it doesn’t matter. The only source of light is the flashlight on his helmet and some strange flickering speck hovering in the air (yes, I hear that on “Into The Maw Where All Men Die”) and if you ask me, this is the best track Randal has recorded up to this point, it’s less “industrial”, than what he did on “The Architects” or “Remnants”, more restrained and focused on aural storytelling. I love the atmospheric ending of this piece, like some sort of discovery or enlightnment. He knows something already, we don’t. Duncan Ritchie and his Flowers For Bodysnatchers will shed some light on this.

I won’t lie, I’m not really convinced by this project. I mean I appreciate his technical and compositional skills, but he presents this style of dark ambient which is not exactly my cup of tea. There’s a strong “gothic” or “neoclassical” touch in it, which is rather distant from what I look for in this kind of music. I was a bit surprised to see him take this concept on, as I feel Flowers For Bodysnatchers would rather fit a Hammer horror film or something like “Interview with a Vampire”. Yes, yes, I remember what “Aokigahara” was about, it’s a fascinating concept, but I’m strictly talking about music here, and I hear the breakaway between the words and the sounds. This time the track called “Black Echo Of Morgues And Memory” fits the concept, and even though for me is the least fascinating of all four, it’s still quite suggestive. The “Locus Arcadia” protagonist enters the engine room; I can hear some oil dripping, metallic clangs, some scratching on the walls and other sounds of unknown origin. He doesn’t discover anything. The last seconds of the previous track was but a tempting light right before his entrance into even darker parts of the space station. Oh fuck, did my flashlight just break down?

Just one thing: I follow the concept along with the four musicians here, often adding something for myself or just making things up, but obviously for you it’s not necessary to do so. You can, or rather you should listen to it in the way you like. I always encourage people to do this by saying that your reception of the music is the only proper one. I liked the “Locus Arcadia” concept and in this particular case I decided to embrace it, but if you don’t want to, just don’t. How you feel the music is more important than how anyone else feels it, including the musicians.

With Council Of Nine’s “Pale Sister Of Sanctuary Lost” the album takes a more atmospheric turn – eventually the astronaut did find something. Whether these are the bodies of the crew or an extraterrestial artefact, it’s obvious that it is something that changed his perception of what he had experienced up to this moment. This track is less claustrophobic, the drones are more spatious and broad. Actually, even though it’s a very good track, I think it fits the concept least of all. I see a wasted Earth, I can feel the air on my face, it’s polluted but it’s still “Earth” air. I can see this huge glow over the horizon, I think the day without a tomorrow has finally come. But since I don’t want to stray that far from the main story, let’s just assume that the astronaut just found out what just happened to his home planet. That it doesn’t exist anymore in the form he remembers it.

“Prisoner’s Sacrifice Facing Arcadia” is illustrative music at its best. In the first seconds you hear exactly what you’d hear in a space station – at least I think so. Codes being entered, doors opening, operating machines and computers (the power is on!), our hero’s breathing. All these sounds merge perfectly with the drones and textures which become an integral part of the enormous construction drifting in space without any reason anymore. I think this is the best part of the whole album, so much is happening here; when around the ninth minute things go quiet and we hear only the cosmic wind and the beating heart, and after that this atmospheric sequence emerging from the void, I’m starting to feel that this is what this genre is all about. Evocative visions projected in your mind, emotions ranging from anxiety to a blissful peace. The peace our astronaut finally found. There’s no place he could return to, so there’s nothing left to do, except reconcile with his fate. After all, you can’t fight it. He closes his eyes and begins to take off his helmet. Eternal sleep awaits. But wait… do I hear a woman’s voice somewhere, coming from a distance?

Yes, we can assume that “Locus Arcadia” ends with a cliffhanger and the possibility of a sequel. We all know how it is with sequels – not every series is “The Godfather”. But we’ll see, for now let’s just enjoy “Locus Arcadia” which is both a good sound story and a fine piece of dark ambient. End of transmission.