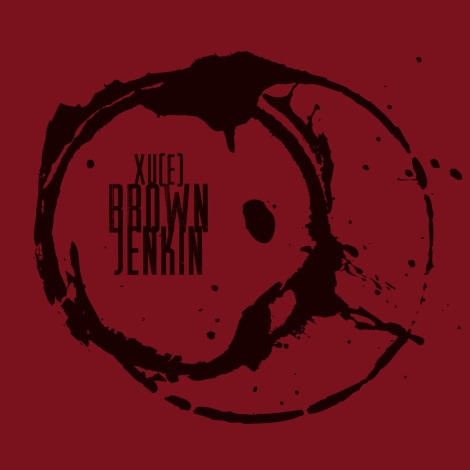 One of Lovecraft’s lesser known stories gets a score put to it. xu(e) are a duo who practice ‘bund-side dark jazz’ and I must say that they have chosen their designation well, you can smell the fetid Earth all around you at low tide while this is playing. All of the plot points to ‘The Dreams in the Witch House’ are addressed in a smart and efficient manner but what is most prevalent on ‘Brown Jenkin’ are the marauding nemeses of dreams; an uneasy truce made between the world when the eyes are open and that persistent scratching behind the walls which only occurs before waking or right at the moment slumber is achieved.

This tale was widely ridiculed at the time as being shoddily written, several prominent literary minds of the time dismissed it as either being too vague or too explicit. Brilliance comes in many forms, does it not? Lovecraft himself is said to have replied to a friend: “I hardly thought the miserable mess was quite as bad as you found it.” What is telling is that this album is neither vague nor is it explicit. xu(e) have managed, somehow, to balance these two opposing terms perfectly. The curiousity of our character (Walter Gilman) as he tries to sort out just what is going on is cast against his primary antagonist tormenting his mind with an expert precision.

I am, of course, speaking of the nefarious rat/man who is Brown Jenkin. He is described as being a familiar to Keziah Mason although the diabolical machinations of his own desire for power seem to transcend this role very easily. He wavers, it seems, between the planes of dimensional space… darting back and forth between them as the story progresses. One place he is almost always found (even his bones at the very end) is within the walls. Our Italian pairing -who compose their works in separate domains, never meeting- give him his own theme and it truly evokes him. You can clearly see B. Jenkin moving through the shadows, lurking in the obscured corners and proudly displaying his mischievously saturnine eyes in the moonlight.

Now as much as I have enjoyed this album, I should warn you that it, much like the tale it depicts is not for individuals who only want background music. Oh no, ‘Brown Jenkin’ creeps out of one’s speakers -or headphones if you’re really adventurous- like a malignant fog, within these banks of feedback and devious engineering you will hear more than enough to convince you that this band have been plotting to record these events. For how long is anyone’s guess but for whom is more than apparent.

This is first-rate electro/acoustic experimentation with the constructs of perception and perspective.

You are in for a ride through the hidden facets of time and space, those quiet little moments where everything shifts just the tiniest amount out of focus and you have to question not only what existence is but whether not humanity are merely toys being batted this way and that by the whims of unseen hands. Delicately, xu(e) move us through the different phases of what some would term madness with a lithe and commanding dexterity. These coarse, strange textures move brusquely against one another and if it happens frequently enough we awaken. Pity the ones who don’t.