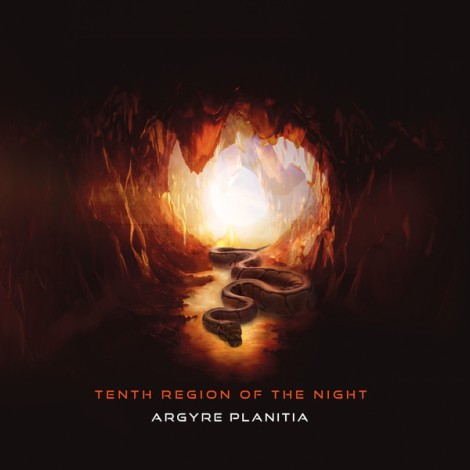 Argyre Planitia is a musical child of Stefan Voß, a musician who lives and creates in Hannover, Germany. I’ve heard of the project before, but never really dug its music. If I count correctly it’s the artist’s seventh album and the second released in a physical format.

I have to be honest here, I wasn’t really convinced by the words announcing “Tenth Region Of The Night”. Let me quote a fragment: “An inner space to do battle with unimaginable foes, mythological beings and walk shoulder to shoulder with Gods. Night after night, the struggles continue, only ending once the dawn breaks. And breaking it must …..”. I mean sure, this is dark ambient style and entourage, sort of “take it or leave it”, but lately I catch myself that all those grandiose descriptions don’t really appeal to me and I prefer “the less words the better” attitude. After all we have our own imagination, don’t we.

So I switch off the words, I pretend I’ve never read them and I approach the album with a clear mind letting the sounds paint the images within. And the album is rather efficient in triggering a dark atmospheres. This time not through the low-frequency drones, but the swirling, flowing mysterious synth textures, intertwining one through another, giving the impression of cosmic solitude. And some sort of mystery, an undefined threat, which is not about a specific creature or entity but rather a threat of the unknown, of something impossible to comprehend by the human mind… Look at me, I’m grumbling about dull press-release texts, while I use the exactly same rhetoric myself in the review. Maybe this is all about dark ambient in general? That cosmic escapism we desire and expect nothing else?

Because in case of “Tenth Region Of The Night” you get a decent dark/deep ambient no more, no less. If you’re fan of the genre, you’ll get precisely what you want, you won’t be surprised, yet you won’t be disappointed either. The tracks are skillfully composed and professionally produced. Perhaps it’s just my impression, but I noticed the slight references to Michael Hensley’s projects, that is Yen Pox and Blood Box. And in a wider perspective to the electronic classics like Klaus Schulze as it’s a multilayered synth work which has a few moments, when the sound reaches the density equal to the darker efforts by mentioned German or Steve Roach.

If you read this, I assume you’re a die-hard dark ambient fan, because no one else reads this anyway. So if you are, get this album. It won’t blow your head off with innovation, but you’ll get a pleasant, one hour long, astral voyage.