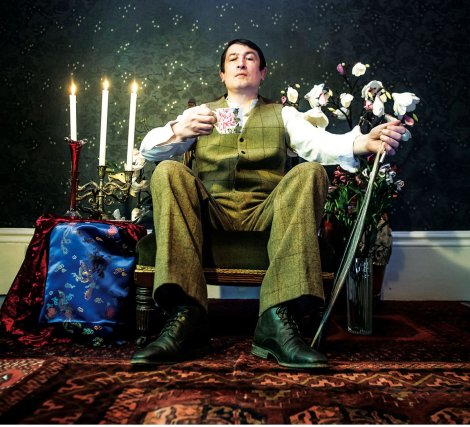 Ah just look at him on the cover in his Sunday tea time best. Flip the panel and you’ll see how thin the veneer is as a Guy Fawkes mask and full fencing uniform greet you; there can be no doubt that we’re living in extraordinarily perilous times with one guy in the United States being worth over one hundred billion dollars controlling more than half of all domestically shipped packages. Add to this he’s worming his way into food distribution and medicine, owns a major newspaper and has a massive deal with the CIA: the shape of things to come becomes plainly obvious.

What could go wrong?

I’ve strayed from the topic, I know, but it’s no accident that he’s composed an album like this. After having spent the majority of his career avoiding present day events, Matt Howden has had enough; somebody’s punk roots are showing on ‘Crumbs’ as these songs get right to the point and then move on. Fear not, long time fans, that violin of his still makes plenty of appearances throughout the proceedings and there are a couple of tracks like “Forge a Better World” and “Just be a Lot Nicer” which hearken back to where he’s been before.

Aside from these, however, what’s on here is alien to the rest of Sieben’s catalog. The anger and cynical outlook underlining the first four songs alone would turn even the sweetest red to vinegar; so many lies have been told, so many promises broken and so much potential has been wasted. As you sow, so shall you reap; a packet of crumbs is included with the first 200 copies, make of that what you will… it might as well have been salt for all the good it would do us, economic mobility being what it is. We’re living in an oligarch’s paradise, the dystopian two class society which has long been the goal of a global aristocracy you only thought had gone into exile.

What is remarkable about this album is that it leaves no stone unturned, the press in particular are taken to task for their fear mongering and sensationalistic “content”. Truly independent, investigative journalism has been dead a long time; we have six media companies which control all aspects of the news here in the states and they’re more than happy to do the bidding of those who own them. Anti-trust laws sit and rot out back, buried far beneath the massive influence peddling which has rendered them toothless; consolidation runs rampant and opportunities wither: “I’m not one to preach but the world is messed up, the land is sick.”

Incredibly, his work transitions between formats with remarkable ease as the two bonus cuts find him with a full band giving up rousing renditions of “Here is the News” and the tellingly current “Coldbloods.” Will these become the norm for Sieben, what even is that norm, where does this fellow plan on taking us next; keep your ear to the ground and your eye on the bow. For those who have happily been going along with globalism and the hollowing out of the working class there is only one message this release has for you:

One response to “Sieben – Crumbs”