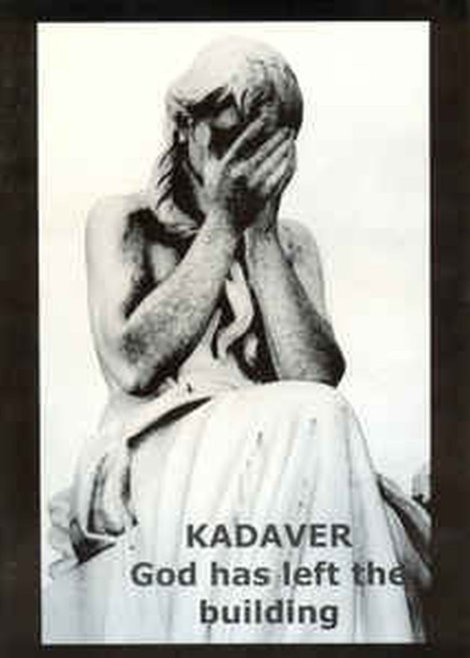 Kadaver has made this recording without using musical instruments. And God was not around to play his deceiving tunes and pervade inspiration with self-pity and indulgencies. The one man noise unit is being active for about 15 years now and this record has been released by the Transylvanian label Mask Of The Slave.

“Centuries Of Hatred” opens the album with a blast of heavy strident and poignant hissings. Perhaps the recent Scatmother album Vaniticism (Freak Animal) is a serious parallel, this time the noises being abusively dubbed on intensity and chaos. A breathtaking scorch and feral pulsating life that appals the ears and turns human senses into a different kind of intrasensory perception, that of a colossal insect of whose organs have just one metabolic purpose: shrieking. The track takes looping notes of a pigsty paramount string concerto for an audience ranged on floors with veins wide open, letting their blood and spite flow down. The disc is to be remembered as a Richard Ramirez joint with Masonna.

You thought blasphemy is best exploited with Black Metal attire, here too it gets a special treatement: not using words but noises assembled with the care of a demented practitioner on the second track “Blood and Feces on the Altar”.

To avoid such enjoyment of an album is to neglect a state of facts and consider some inclinations as childhood errances. But no, some works appear again against time to justify what one has always been, a reflection of the persona over time. The track is linear, coarse and obscure, like such 10 years in life of many (this album appeared in 2006). How sensitive can we behave in the crowd, while inside it is juts this kind of flat tune resounding. Remorselessly.

You wish daily to go deeper, fainted ignominious semi-intellectual, getting new satisfactions out of routine and coffee-breaks. “Deeper”, is the third track, surely not an archetypic event, on the road of the quest for the land of youth. Horizontal ascendancy when above awaits nothing or for those in search of Godot. A climbing on a line, one-dimensional space out of which you turn back the same. Crushed and slightly deformed: twinkling and blinking like when receiving a hit in the back of the neck: such are the sounds here doubled by sparse perversions with snuff vocals.

This is the comfort zone when God has left the building. The black and white package (the disc is a Cd-r in DVD case) can be hanged inside as mirror. Anyway if someone doesn’t agree he can always rent a penthouse and a god.