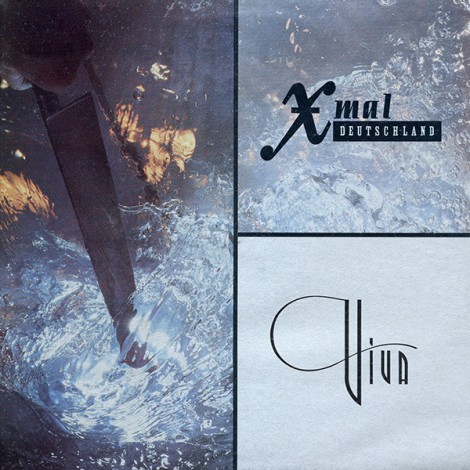 Two albums into their career, one of 4AD’s hidden gems Xmal Deutschland jumped ship and released via their own label -fittingly named Xile- a true masterwork of the era: 1987’s ‘Viva’. Now you probably are wondering why it is you haven’t heard of this one or perhaps why even in 2017 it remains out of print, here’s the main reason: distribution. To find this beauty outside of Europe back in the day was a coup, I only managed to locate a cassette copy of it (which I wore out long, long ago) at a local shop which specialized in imports.

No chains carried their work even though a remarkable number of employees at them knew who this band were. GEMM would later come to the rescue in the 90s when some unwitting dupe sold me a CD version of it which I guard zealously.

Another factor was that the majority of this album was sung in German, which obviously limited the band’s appeal here in the States. Even with the odd airing of “Matador” on MTV they stuck out; their alien looking front woman Anja Huwe certainly didn’t tone it down with her vocals or her looks, to call her riveting would be an understatement. Her eyes cut through your defenses in no time at all , straight to the heart with a voice you’d have to be dead not to be moved by. Language barrier or not, their tone didn’t sit well with any adults around me and rather than try to explain why it was I liked them I’d just leave the room.

The band’s music this time around was highly polished and amazingly precise, in contrast to their previous two release’s tendencies to drift into almost anarchic territory. They were a well-oiled machine on ‘Viva’ with all manner of sonic trickery up their sleeves, particularly on tracks like “If Only”, “Illusion”, “Feuerwerk (31 Dez), “Sicke Moon”, “Polarlicht” and, of course, the previously mentioned “Matador”. There was even a cover of “Morning (Will There Really Be)” by a rather well-known poet which demonstrated their odd literary sensibilities.

They, too, had a Peel Session but again, outside of the mainland and the UK I only knew a handful of others who bothered picking it up.

Despite touring here twice, by the time I was a high school junior, they’d packed it in, going out with barely a whimper on 1989’s ‘Devils’; another out of print release which despite it’s flaws contains several fine songs from them. The exuberance found on their third album is undeniable, I think they really expected to hit it big with ‘Viva’ and that they did not is absolutely stunning. A simple case of bad timing, ‘Dawnrazor’, ‘Floodland’ and ‘Kiss Me Kiss Me Kiss Me’ were what everyone else around me were buying and playing as a matter of routine.

There are those of us who remember, however and no amount of time will take this band away from us. If you can find a copy, acquire it at all costs. It’ll come dearly but with song craft like this which has aged gorgeously you won’t mind at all. The singles contain even more treats in the form of b-sides like “In Onyx” and mixes which if there ever is a proper re-issue had damn well better be included. They’re never coming back but the decade would have not been the same without them and for that alone they have my unending gratitude.