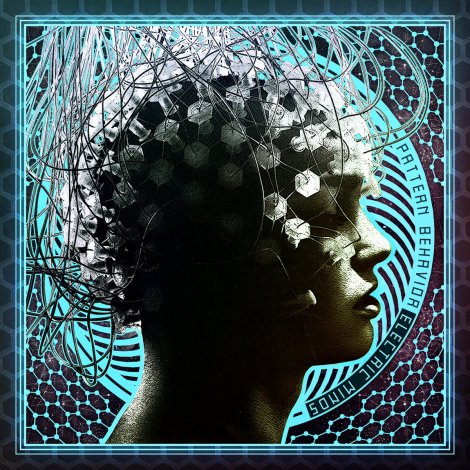 While the rain patters down outside, I’m in here with the first full-length from Pattern Behavior, a duo who operate under a few other names and have an unerring precision to their sound. A lot could be made of the catalog number here but I’ll leave that to others. Raab Codec, the musical director, has been doing this for many many years. Those of you in my age group will no doubt recognize his name from ye olden days, however, this guy doesn’t stay there. I’ve seen this outfit compared to some highly regarded Sheffielders but there’s an aspect to what I’m hearing which only one other guy out there could conjure and his name is Marc Verhaeghen. This is no knock off which Codec performs but it’s a kindred spirit definitely. Listen to “Above and Below” and then try to tell me who else could pull it off, the sequencing is outrageously detailed.

Pattern Behavior practice a form of dark electronics sadly absent in a lot of the underground these days: music designed for the mind. Complex though it may be, those multiple layers of synthesis can be peeled back to reveal extremely competent songwriting. There aren’t any moments throughout ‘Electric Mind’s run where you have to force interest, every track contains wickedly engaging programming; it is the triumph of mathematics cast against an all too-human backdrop of varying emotions we’re confronted with. This music is just so amazingly logical in it’s execution with not one glance back; I really enjoy his multiple bass lines which seem to grow out of one another before resolving into symmetry so concise that everything around me begins to fall in line with what is playing.

There is certainly an audience for this sort of thing, even now in the days where obnoxious bombast runs rampant and creativity is decided by committee. The single objective of this record is to make you think and in this Pattern Behavior succeed admirably; are there others still left out there in the wilderness who are as reflective as this pair? Have all the years of mindless overtures to the conventions of pop music been thwarted… more and more I am beginning to realize that there’s some kind of awakening going on, as though the implosion of tradition in the recording industry is beginning to bear very exotic, strange fruit.

Experimental though much of this record is there’s still plenty of melody to be found on it and Raab doesn’t skimp on the hooks, either. Those tracks which do contain vocals (courtesy of Elizabeth Virosa) have just the right amount of sweetness to them to reel you in but are by no means accessible enough for any conventional program director to add to their approved playlist. Mainly, however, ‘Electric Minds’ is comprised of introspective electronic workouts ala “Andromeda” or explorations of unfathomable empty realms via the majestic “Spiral Arms”. I’m quite frankly mesmerized by what I’ve encountered here, there isn’t anything to dislike or nitpick but then their Snowbeasts project has been gnawing away at my subconscious for years now; it’s a strikingly beautiful but lonely place you take us to and I can’t thank you enough for doing so.