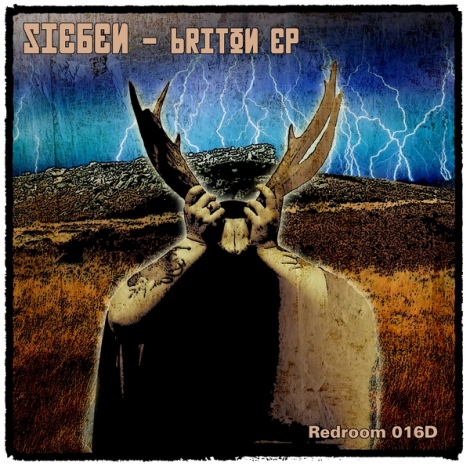 Sieben wraps up his digital-only series of releases with a bang; with a meticulous ear for nuance and a focus on undeniable tension, Matt Howden again demonstrates that he’s not one to be categorized or predicted. “Modron” and “Hillfort Mindset” if given outright beats could cross over into radio play, they operate just beneath the line of accessibility. Seriously folks, play these two around the uninitiated and I’ll wager they start tapping their toes. Oh you don’t think it possible eh, do reconsider because I have seen this phenomena happen before my very eyes.

Matt’s taken a much more aggressive route with his baby here and if you’d been thinking this trilogy would conclude tranquilly then think again, these are the anthems of an invading army.

This EP also affords us the opportunity to hear a rough version of what the next full-length ‘The Old Magic’ may sound like, but don’t get undone… he’s already announced his intention to re-record some of the tracks from these releases; he’ll be augmenting them with other pieces we have not yet heard as well. This fellow is feeling inspired to put it mildly and the results speak for themselves. Each of these three releases have had their own feel and yet somehow when you play them next to one another they don’t clash at all. ‘Briton’ is definitely the most focused of the lot, however, there is little doubt that the composer wanted to go out on a strong and decisive note.

Now that we have all of them one can arrange the pieces however they like. You can run all six long-form tracks one after the other as was the original plan or you can focus in on just a particular batch of four; I’m actually a bit sad that we won’t be getting any more of these delectable little morsels from him because they show how rapidly his songwriting evolves in the space of a few scant months. It’s like being allowed into the Red Room itself in Sheffield to witness him at work which is a gutsy move on his part but then his Rasp project operates in a similar manner.

I’m still envious of those who got to take part in the experiment but that’s geography for you.

He humorously concludes ‘Briton’ with a 2016 version of “We Wait” and so we do. Hopefully not for too long but there’s no defined schedule driving any of this, so enjoy these offerings and have fun trying to work out where he’s headed to. We have the raw elements but not the table which orders them and I’d imagine he’s working off of pure instinct at this point as he begins the final cut. That list of details must be gargantuan! This entire undertaking has been something of a landmark for Sieben, some might even go so far as to call it a watershed moment; all I know is that when he emerges out the other end with a finished album it won’t be like the others. He’s repeatedly changed how his music sounds over the years so it only makes sense that now it’s begun to change him.