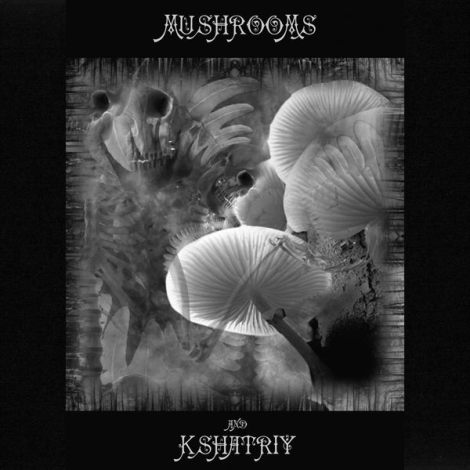 Perhaps we know them only by their gastronomical attire, but at least the mushroom-related metaphors can easily and introduce one to the musical realm of Kshatriy. Some mushrooms are said to have the power of paving the way from the material to the spiritual realm, and this special connection between the vegetal and the spiritual blossoms into the human psyche for proper consommation.

A first listen of the record is practically therapeutical; it cures one of prejudice and false expectations when considering a new dark ambient project. Any other plunging of the brain into the capsule where Kshatriy keeps burning their mushroom becomes musical sorcery.

The only regret I have, as vulgar as it may sound, is to have been listening to the album in a conscious state of mind. Even alcoholic drunkenness would have helped in distracting the spirit from the corruption of matter. In fact, the person behind the project suggests that the record is not the result of solely the composer’s effort , but the product of a peculiar human-vegetal alliance, “ Mushrooms and Kshatriy”. Kshatriy is a solo musical project (the offspring of Sergey) born in Russia and active since 2004, “based on drone style and ambient with noise elements” (Kshatriy.pro). What we have here, Mushrooms and Kshatriy, is a remastered version of an older CDR from 2006, released by Zhelezobeton in 2015.

Inside their observatory, amateurs of such music find delicious moments that urge the soul to sublime meditations, troublesome soliloquies trying to verbalise and configure bizarre images and imbue them with a meaning. Such is the power of analogy that the spirit is already confined in a self-imposed trap of its own incapacity to renounce objectivisation. The realm of mushrooms is reluctant to meanings, it is a space without metaphor, as in the barren compositions of Morton Feldmann; a territory that represents nothing but itself.

Kshatriy imagines nine musical pieces, each one a song inspired by an attribute of the mushrooms (growing, flying, curious, crying, angry, psychoactive, walking, magic, dying). An animistic joy accompanies the interpretation of the songs, a kind of animal delight bereft of thinking, in such a way that the music is so much foreign to the listener which has been transformed into a satisfied observer. Inside this ambiguous taxonomy, “thoughts are all but sensations” (Fernando Pessoa), allowing everyone to become a composing part of the mushroom realm.

The Kshatriy project has much more to offer, about 10 other albums that await to be experienced. High on mushrooms or simply high on music, I will spare the time and space needed for other meetings with Sergey’s music.