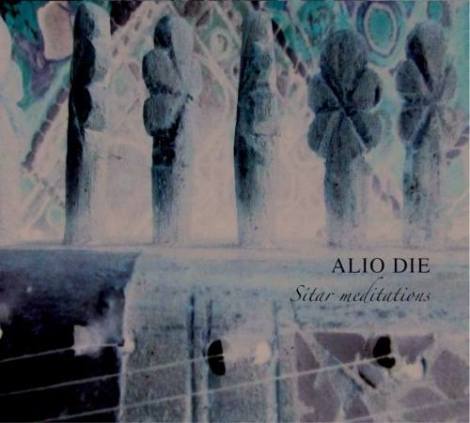 Stefano Musso’s sitar fascination reaches its peak with this album. Couldn’t have been otherwise with such a title. The instrument is not so much the base, as the sole component of this dish. I admit that on some Alio Die discs I felt a slight surfeit of the sitar seeking to dominate the electronics and field recordings. Therefore, I was afraid of “Sitar Meditations” – unnecessarily , it turned out, since there’s nothing the sitar could dominate. It’s the beginning, middle and end of all sounds contained on this CD.

It is a record in a sense synonymous with “Tiento De Las Nieves” by Thomas Köner, but of course more in terms of concept rather than execution or used means of expression. That one was based on piano sounds, single, stretched and treated with reverb. An idea as interesting as ultimately killing with its monotony and boredom. Therefore, I consider the last Köner work as an ambitious failure. The idea itself Stefano Musso devised similarly, but at first listen one can notice that more is happening here. He plays simple melodies, probably improvised, then treated with various kinds of effects rather subtly. Fortunately.

The final effect varies. Sometimes grim, almost dark ambient as in “Necromancer Act I” or “Deviant Whirling”. Another time Alio Die welcomes the Tuscan spring and the first roses (“Primroses Invocatio”). Although the sitar rules absolutely, there are subtly woven backgrounds, I’m not sure if by field recordings or digital effects (rather the second option), like in “Absence In Bardo”. It is encouraging that Stefano left some place for minor bugs and dirt sounds, through which his Meditations gain credibility and a human face. It’s not a polished to the limit, soulless shell that is empty inside. Sometimes a finger sweeps here or there, and so what?

The fact that in terms of sounds “Sitar Meditations” beats “Tiento De Las Nieves” on its head, doesn’t mean that it is a very dynamic album. Certainly the dividing on shorter forms is helpful, so that Stefano Musso has more freedom in shuffling the moods, which he’s able to close within a smaller number of minutes. Yet sometimes it’s still all too static, so that you almost cease to notice the music transforming into another element of the environment. Or background sound for meditation, considering the title of the disc. But I frankly admit that for me it’s somehow difficult to concentrate on “Sitar Meditations”, and even as a backdrop to everyday activities I’d prefer to listen to something else. A lot of other Alio Die efforts speak to me more in both respects. Even at this very moment my hand strangely reaches in the direction of “Suspended Feathers”.