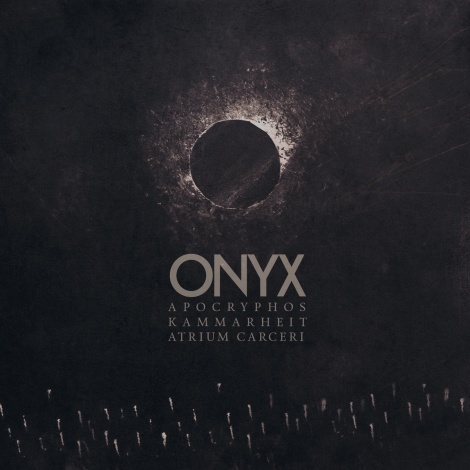 I was waiting for this one, can’t say I didn’t, but I have to admit that from the moment I first heard about this project, it wasn’t enthusiasm that dominated my heart, but curiosity. My experience as a fan has taught me that the collaborations (not splits) of top names generally appear to be a decent and professional job, but never exceed the greatest achievements of individual artists (Nadja/Troum, Hecker/Baker, Atrium Carceri/Eldar, BSE/Moljebka Pvlse, 7JK, that is Job Karma/Sieben or my favourite example, TriORE). Not always, of course, because the ones like The Moon Lay Hidden Beneath A Cloud/Deutsch Nepal or Troum/Yen Pox are just glorious examples confirming this rule. I haven’t heard the Germans’ collaboration with Raison d’être yet. Even though the whole thing is not even about skepticism, but my ordinary human care to not… get “disappointed”; this word is too strong – rather to avoid this frequent impression “It’s good, but …”.

The label mentions three “veteran” artists. Well, I can see two plus one young, talented, but probably having the peak of musical creativity still ahead of him. I’m talking of course about Robert Kozletsky, already gaining a lot of deserved attention thanks to albums released under four different monikers (Apocryphos is the most recent as far as I’m concerned). When it comes to experience it’s hard to compare him with the other two, who showed their first outputs to the world more than ten years ago. Routine and youth, but also three different approaches to dark ambient: illustrative, cinematic landscapes by Atrium Carceri, Kammarheit which is more restrained, a little surreal, yet hiding a whole lot of feelings, and Apocryphos, as if standing half way between those two and adding some dense and massive drone art and a specific dose of classic Scandinavian, so to speak, emotional darkness (though Robert himself comes from Pennsylvania).

They begin with “Immemorial”, which takes the listener to the world created by Atrium Carceri on his regular albums, a world full of ashes and ruins of something once majestic and beautiful. Subtle keyboard melodies, a trademark of Simon’s project, blend nicely with elegiac drones. While “Ones Atop The Unknown” is exactly what the other two guys are doing the best. Sound textures, both ethereal and atmospheric as well as vibrating with low frequency anxiety, intertwined in a love embrace creating a truly touching composition.

I remember a few years ago during All Saints Day, I was at the cemetery visiting my grandparents grave. The whole family gathered there, the whole cemetery was tremendously crowded. Except for the grave next to my family. After a while a woman approached it. Around her forties, good-looking, well-dressed. She sat on the bench, lit a cigarette, and started to look at the photo of a man on the tombstone. And she was sitting like that, just smoking, staring at her husband’s, brother’s, lover’s – have no idea – eyes on the picture. And after ten minutes she just got up and went away. That was it. It was an inexpressibly sad scene which no one noticed. I remember it to this day. Pure grief stripped of any pathos. While listening to “Night So Close To The Tongue” I have that woman right before my eyes again. Her pain and loss enchanted in a simple melody.

“A Lonely Strain” lasts almost ten minutes, during which our triumvirate once again raises the most sensitive strings in my soul. The drones that emerge in the middle of the track remind me roughly of Raison d’être from the “Within The Depths Of Silence And Phormations” era, just devoid of any religious or industrial ornamentations. Pure essence. Dream’s Essence.

And at this point “Onyx” changes the general direction followed by the three artists. An end to the mourning, it’s time to enter the twilight zone. “Aphotic” is dark, there are artificial choirs and echoes of some bells, while the drones themselves are tuned a few octaves down. Was it Apocryphos who has produced the base for this, that they processed together later?

In the following passage, “Cavern of Igneous Flame” the mark of Kammarheit is felt most intensely This is the way how Pär Bostrom haunts the audience on his regular albums. Seemingly, this is an ascetic form which doesn’t strike with literal emotions, yet suggestive enough that I felt like I’m standing under the tree from “The Starwheel” cover. The world around me by no means takes on color, I still find myself in a monochrome realm while listening to the title composition. At the same time it gets more spatial, I feel wind on my face. And a delicate surprise at the end: check for yourself.

The composition number eight is the longest on the album. And it presents yet another approach to the dark ambient form, as in addition to traditionally generated drones the guitar also leads the way here, sobbing tenderly in the foreground, but down there in the structure of the track going into a more distorted and aggressive dimension. This is “The Pale Sign Revealed”.

The less than four-minute long “Avenoir” ends “Onyx” and somehow it staples the whole thing, because it’s a work to a certain extent similar to “Immemorial”. A poignant key melody is now treated with slightly stronger reverb and pressed more into the background, but it doesn’t prevent from calling “Avenoir” a sister composition to the opening piece.

The theory posed in the first paragraph trembled, because in fact, while “Onyx” doesn’t beat the best achievements of all of the artists involved, yet at the same time yes, it’s a damn good album. None of the projects dominated the others. Perhaps in several individual passages you will notice that the contribution of one artist was slightly larger than the other, but overall the sound is coherent and consistent enough that if I didn’t know, I’d probably wouldn’t have figured out that it’s the work of three musicians with each their own style and identity. Powerful stuff, which I hope will gain notoriety and respect in our small dark ambient world.