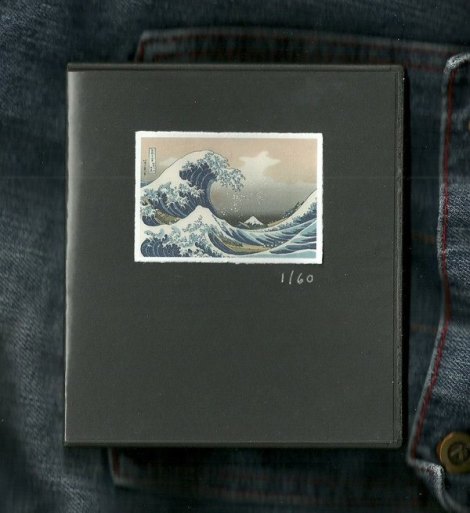 The last The Floating World album, “The Wood Beyond The World”, enthused our team, so we gave it our expression in the reviews that you can find somewhere on the site. Meanwhile, the Reverb Worship publishing house recalls Amanda’s debut, entitled “Unda”, originally released by Barl Fire Recordings in 2005. It has been remastered and released on CDr, limited to 60 copies. So since we describe this album relatively late, you may have trouble acquiring a copy, but I tell you, it is worth it. (Ok, I just checked the label’s website and it doesn’t have a “sold out” entry yet.)

So this is the beginning of the road that Amanda still consistently follows. Nautical artwork on the cover. Looks Japanese. Aqueous titles – the album seems dedicated to this element. After all, “Unda” means “wave” in Latin. And although the samples of sea waves are absent, it’s hard to resist the impression that in choosing such a concept the artist knew exactly what she had in mind and what she wanted to convey. This ubiquitous flute could evoke sirens tempting unsuspecting sailors from the depths of the sea…

Sure, it’s a less complex album than those recorded after. Comprising actually of just the flute and a droning electronic layer. But this formal restraint works exceptionally well. After all, the ocean itself observed from the crow’s nest of a ship sailing to nowhere looks as beautiful as it is monotonous, and you need a good deal of focus to get carried away by its charm. At least for an extroverted person; but since ambient music is rather for introverts, you shouldn’t have a problem with being carried away by it.

On the other hand I have the impression – more in the case of “Unda” than any other The Floating World work – that this music could actually do great without the flute. No, maybe I exaggerate, maybe if its role were somewhat limited, because sometimes it felt like this instrument overwhelms the electronics and draws all the attention on itself, allowing the drones to come the foreground from time to time only with regret. And they sound great even if they aren’t particularly complex in comparison to other ambient colleagues. Strength often lies in simplicity, and this is the case here. It’s all immersed in a deep reverb, probably delighting the boss of the label responsible for the re-release.

The Floating World is definitely not the most popular and recognizable project in ambient’s little world. Even as Amanda releases in Cyclic Law, somehow the project’s releases go rather unnoticed, at least when we compare them to the standard representatives of the Canadian publishing house. But surely it’s unconventional music, the project has its own unique style, and you wouldn’t mistake The Floating World with anyone else. Therefore, you should observe how it all sprouted and eventually turned into a beautiful flower.