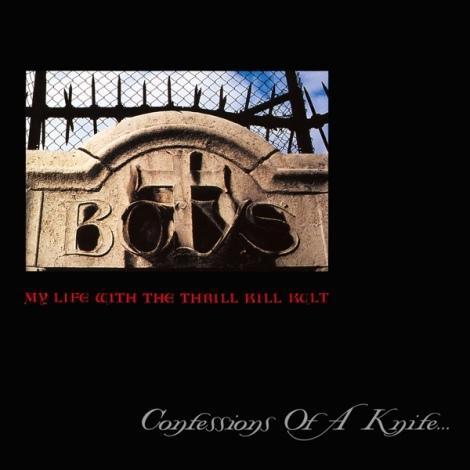 Generally, second albums tend to be where bands run aground or at best tread water while they hope and pray for inspiration. This was not the case with TKK, who after having dazzled the clubs and fans alike with their debut record holed up and focused intently on what was to be their sophomore effort ‘Confessions of a Knife’. It’s no coincidence that in the time between these two releases, their label’s prominence grew to near epic proportions. Suddenly, you read more and more about that “little label out of Chicago”. Al J. of Ministry even landed an interview in Rolling Stone so it seemed the time was right for a bit more misanthropy… something of a more sarcastic nature to push the boundaries even further.

This push arrived later in 1990, taking the form of an album which even now is considered to be the band’s high water mark by many. I would be among that lot. Songs like “A Daisy Chain 4 Satan” and “The Days of Swine and Roses” left little doubt in the minds of those who listened that the game was afoot, as they say. You didn’t have to be a member of Mensa to pick out the unbelievable levels of camp employed on this outing; the cynicism was potent and thanks to the sneeringly caustic efforts of those infamous Bomb Gang Girlz the stage was blown to bits.

We hadn’t heard anything like this before, my friends and I. Even though we were fans we hadn’t thought they go this far. To sample children decrying the evils of satan was entertaining enough but that chorus of “christian, zombie vampires” took it to new levels of satirical brilliance. My parents did their utmost to find my copy and do as tipper did: burn the damn thing. A small side note to those who weren’t around then, mrs. gore headed up an abominable organization known as the parents musical resource center, or pmrc, which was dedicated to scape-goating musicians and bands which challenged the conventional norms of the day. Which at that time included pretty much anything not white, christian and of course, straight.

For as much as we loved this record, more than a few gay boys were able to come out of their self-enforced shadowy lives and enjoy TKK with the rest of us. That, more than anything else, is what makes this work so remarkable. Never mind the heavy bass guitars and jaw rattling beats, ‘Confessions of a Knife’ was a watershed moment for those friends of mine who knew what they were from day one but were unable to show it for fear of terrible consequences. Everything wasn’t always so safe and accepting as it is now. Believe me, gay marriage was the last thing on any of their minds then, I ought to know having had to patch up and aid my share of those whom the crowd wanted beaten senseless. Survival was enough.

But for a while, whenever this one played, people forgot the outside world with all it’s constraints and conservative prejudices. The strobes flashed against the mirrors and the electric messiah reigned supreme, or was that just people riding the mindway after years of darkness… the outright contempt this band had for the organized morals of the religious right in the United States wasn’t disguised by any means. They delighted in irreverence which managed to get them branded as blasphemers and unsound deviants out to corrupt the youth; for all your efforts, tippy, you never got them.

Momma thinks it’s time for you to learn a little lesson.

Even though a lot of my friends from those days didn’t make it out of the 90s (drugs, AIDS, marriage) I have a lot of memories tied up with this LP -the white vinyl version just took it over the top- and still listen to it quite often. The band themselves continue to exist to this day and still refuse to compromise. While I’m no longer into their work as much as I used to be, I’m grateful for the stance they took and as for the music they made… cooler than