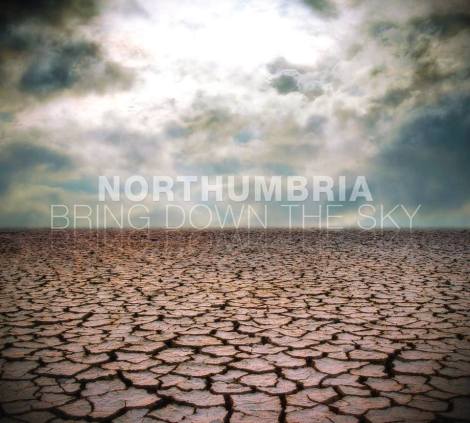 Northumbria was a medieval kingdom, the lands of which now belong to the UK. These include, among others, the island of Lindisfarne, with the abbey plundered by the Vikings in 793 AD. Northumbria is also a musical project by Dorian Williamson and Jim Field. “Bring Down the Sky” is their second full-length release, which – apart from the use of electric guitars – doesn’t have much in common with Viking metal.

The thing is very much in the style of Consouling Sounds, a label that specializes in metal, but never the conventional kind; infected with ambient, post-rock or shoegaze in such a way that those styles often begin to dominate the metal matter. “Bring Down the Sky” is built of guitar drones standing halfway between doom and ambient. It’s clearly noticeable however, that these two fellows are attracted by ethereal space rather than monolithic riffs, hence Northumbria is closer to Thisquietarmy than say, Sunn O))).

Jim and Dorian try to add an organic flavor to their music. They are aware that it’s quite a difficult task due to the limited instrumentation, but somehow they manage to do it. Not only because of the cover or such and no other song titles (“The Ocean Calls Us Home”, “The Silver Forest”), since if they couldn’t cope with the material that reaches our auditory organs, the most perfect front cover wouldn’t help. “The Ocean Calls Us Home”, the second song on the album, just couldn’t have been more adequately titled. While “Transcendence”, the album opener, is a trance-like drone, in this track we have guitar melodies roaming slowly, truly reminiscent of the vastness of the ocean seen from a crow’s nest on some shell that someone dared to call a ship. Later the riffs are starting to thicken, crunching like storm clouds looming from behind the horizon. Water will consume us and the ocean will, in fact, become our home.

The songs are quite long: “Ostara” lasts more than ten minutes. Who knows if it isn’t the most ethereal piece of the disc, in a sense referring to the mood of “The Ocean Calls Us Home” while pointing to Canadian post-rock inclinations, wallowing in serene solitude. Not just “Ostara” but the whole release is drowning in reverb; this however doesn’t cover up the shortcomings in the album’s sound as is often the case, but gives space to the music instead, creating the impression that its source is not a studio limited to four walls, but the titular sky, or the ocean. Elemental power.

The title composition hits the hardest. Powerful, loud and massive, but also melodic. Distinguished by a fairly raw and cool sound, but paradoxically calming. All the fascinations and musical references scattered across other corners of the album converge: ambient, drone doom, post rock…

Interesting that Ihor Dawidiuk of Parhelion made the cover. I recently used the name of this project in a review of Ukrainian Monocube, finding some points of reference. But this common denominator was looming far away there. In this case both projects are closer to each other on the aural/ atmospheric field, although, of course, Ihor is much more ambient-oriented. It doesn’t matter, as I really like this project. Apparently I like Northumbria as well. For that warm coldness and harsh relief.