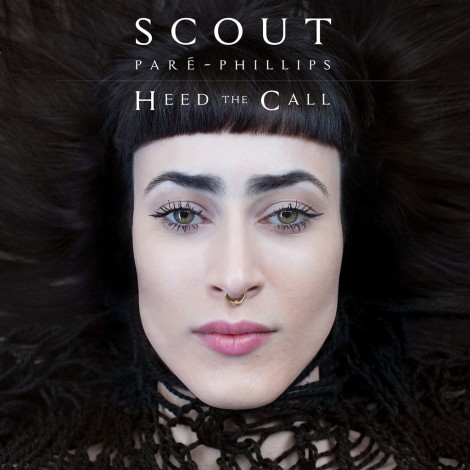 Scout Pare-Phillips knows what heartache and loss are, she knows how love so often reduces one to ruin. How else could any of these ten songs be explained, how else would the authenticity bleed through her piercing vocals like a wounded bird stricken from the sky. A word of advice, her voice doesn’t change throughout ‘Heed the Call’ so if you’re not into it then skip this. Her words when you really get to know them tell tales of bittersweet situations and of pleading desperation; it sounds like a howl on here at times, the shrieking pain you’d expect from a cornered animal trying to pull it’s bloodied, broken paw out of a trap.

That trap, of course, is the trust we place in one another which can sometimes wreak havoc; the terrible price of vulnerability, how easy it is once you allow someone into your heart for them to rip it to pieces and leave you staggering through the rest of your life. Scout also operates on the level of being the one who can’t resist her whimsical surroundings, she threads sentimental narratives all across the span of an album which is brilliantly adorned and yet scornfully short. Why only ten. Why not twenty or thirty… why ever stop at all.

Opening up like this is something you don’t get much of anymore from an artist, people are their demographics and focus groups these days. Who cares if you’re putting the blade to your own throat as she does sometimes here… the suits would be happier if things had a catchier middle eight. I cannot even begin to fathom how hard it must be to break from the media driven stereotype for women in music with the world what it now is. Our heroine here can easily join the ranks of Lene Lovich, Polly-Jean, Kate Bush, Diamanda Galas and even Danielle Dax with the work she’s doing. Uncompromising, cruel, vindictive at times but oh so satisfyingly ugly. There’s a heart underneath all of this and it’s pouring itself out on these songs.

A thick, black trail of blood runs through ‘Heed the Call’ and while it’d be easy to say that vengeance is the goal here this is no simple collection of murder ballads. Oh no, that would be much too simple. Pare-Phillips blurs the lines between desire and despair masterfully; she is equally at home with both and I suspect knows their particulars quite thoroughly. I don’t even know her age but she’s been there and then back, this is the voice of experience coming at us here. Be a brave soul and listen. She’s made it easy enough to tap into her fantastical world where emotions resonate over years and years, it is our turn now to repay her kindness.

Consider well the choices you’ve made in your own life, breathe in the failures as well as the sweetness of success. Then ask yourself, would you be willing to allow a bunch of strangers to know both sides of that sword which providence has wrought and which you’ve fallen on so many many times?

Not one to place all her eggs in a single basket, Scout also has a rather engaging website full of curious content for one to peruse. When I hear some people say that ‘art is in everything and abounds everywhere’ I often balk, the cynic in me as ever. ‘Heed the Call’ puts that cynicism to bed while it plays, there’s no possible way to view this album with any sort of misanthropic intent. What’s on here is earnest, it burns with passion and won’t lie down and die no matter how much shit this world throws its way.