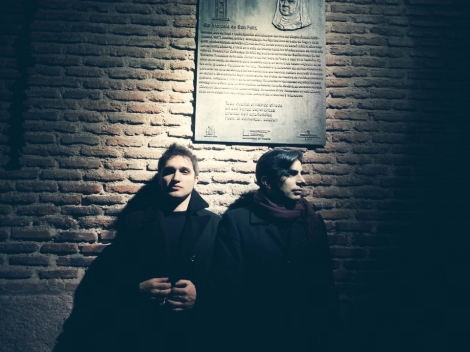 “Oniric is an italian duo formed in 2005 by Carlo De Filippo and Gianvigo (Gianpiero Timbro). Their first artistic meet brought quickly to the spontaneous and essential compositions of ethereal and dreaming inspiration, merging Carlo’s melancholy tunes and blurred dark sounds with melodies and sonorous elucubrations from GianVigo: since the early works (EPs), the nostalgic and intimate vein was a constant for what would been the future oniric production.” [via official website]

How would you summarize this past year on an artistic and personal level?

On the artistic level, this leaving year gave to Oniric the opportunity to join two great festival: Neofolk Festival (with Rome and Har Belex) in Madrid (ES) on March and the Entremuralhas Festival (with Darkwood, Hocico, She Past Away and many more) in Leiria (PT). It was also the year of our new single “Pierrot in the woods”, included in “Places” compilation, an ambitious project in which converged music, image and lyrics produced by Caustic Records for the lovers of folk \ dark folk sounds. Our personal level feeds on the artistic one, so we can be satisfied either way 🙂

Which album have you listened to most often this year (not necessarily released in 2014)?

What was the best gig you’ve attended?

What was the best non-music related cultural experience you’ve had?

We had a collaboration for the production of two great video documentaries about  a postmodern italian architect (Paolo Portoghesi) and his works,  broadcasted few week ago on the national tv networks, but also in this case we were still involved in the soundtrack creation process.

Was there an event within this past year that has significantly influenced your philosophy and outlook on life, or your perception of the world around you? For instance some specific place you visited, people you met and so on?

Every time we move towards new land, especially abroad, our mental horizons can only widen and most of the times we’re so struck and fascinated by the different cultures that, once back at home, lead us to feel always a little veil of nostalgy for the faraway places still imprinted in our eyes and for the people met during our journey; and in this way, we feel closer every little part of the whole world. This year in particular it happened in Madrid and in Leiria where we spent really great times, and in our hearts is stored each image of those days, each road, each person.

What was your greatest disappointment in 2014?

None, at least it seems so 🙂

Your plans, hopes and expectations for 2015?

We’ve already planned two gigs in the early 2015, one with Sieben in January and another  with The Legendary Pink Dots, at the BlackSun Folk Festival act III in springtime.
We hope to grab always nostalgic flows caressing us, and to honor their beauty with new evocative melodies that we’ll want to share with our dear listeners.