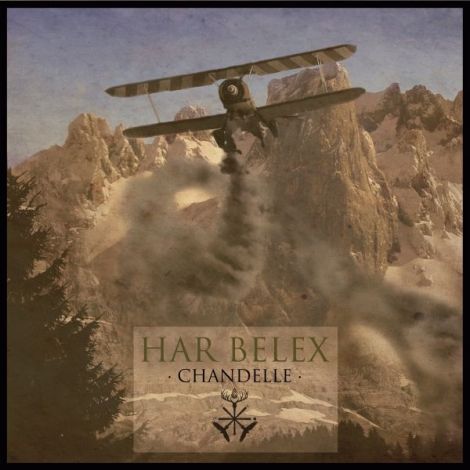 A small table on the cliffs above the sea. The surf venomously billows below and a fine spray rises whilst you enjoy remarkable Rioja wines and a charcuterie plate that would be the envy of Madrid. Perhaps a small wedge of Manchego accompanies your repast; while you sup Har Belex are the band playing on that small stage opposite you. They are a celebration for the senses, this duo, a veritable fount drawn from the marrow of life. The feel of all that blood rushing through your veins they have corralled into their songs. While both Manix S. and Salva Maine are very well known in the field of dark electronics, ‘Chandelle’ finds them exploring a much older, acoustically-based style of music. Quite frankly, I never knew Manix S. had this in him but then again there are elements to this work that have been in Pail for a very long time.

To cases, though, Har Belex do indeed fall under the heading of Neofolk but believe me: they’re a long long way from what you’ve been raised on. Death in June or Current 93 this is not; these two gentlemen prefer to root their songs in contemporary issues and not the exalted (and at times stuffy) ruminations on mythological or historical events. I’d wager they both sing but whomever is playing that guitar surely has an aptitude for it. These aren’t just chords being strummed mindlessly, there are a plethora of individual notes that really lend a Mediterranean feel to the proceedings. Some songs have drums and traditional song structure, others do not but there is always a strong vocal presence. Never angry, never hateful but definitely  commanding; Har Belex make the most of their tunes by infusing them with fastidious song craft. Nothing overlooked, no indulgent experiments and not a single word wasted.

Do yourself a favor and pick this one up, ‘Chandelle’ will reward your curiosity ten fold. I read that they spent two years making this album and it definitely shows; artisans who are putting it all on the line, opting to release work they believe in strongly regardless of what anyone else might think. I wonder if they finished this and weren’t just tempted to keep it to themselves… thanks for letting us hear what you’ve done, it truly does have a character and mind all it’s own. I couldn’t forget the heart, either, which this release reaches out from across the waves to speak from. You know when someone defines everything perfectly? Suddenly it all clicks, every element aligns and sun shines down on you alone in the midst of your revelry.

That is Har Belex. Through and through, right down to the core.

“Six AM” is really stuck in my head right now, by the way. No one likes being awake at that hour but this act have a knack for lyrical insight that makes even a setting such as this come alive with possibilities. “Madmen in Wasteland”, “Annual”, “Basoan”… when did these first germinate in our heroes heads. There are so many details and richly defined settings involved that I can’t help wonder if they’re drawn from either personal experiences or the reminiscences of those long gone. Naturally, they put the strangest track last:  a seething, recriminatory statement entitled “Gernika” which seems to be directed at man’s main problem in life: himself.

For those of you who bought their EP feel free to celebrate, one of the tracks on it does not appear here and there is also another one only to be found on the ‘Places’ compilation their label put out. Dive into their mysteriously inviting realm… the only thing you’ll wind up being is loath to leave.