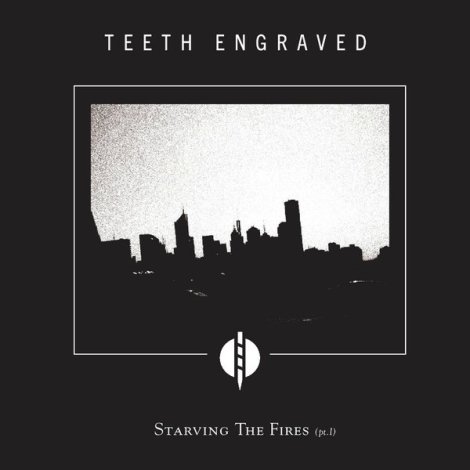 Not their first album, since there is the cassette release “Kosmiche Death Worship”, but the first one released for Malignant Records. Roughly speaking, the two American interpreters behind the project approach a death-drone ambient with lo-fi attitude or plainly intended primitivism.
Nothing radiates during their inception piece “Radians”, a violent, scorched rumbling of metallic and industrial noises assembled with virtually the only care for haunting your eardrums. The arrangement of insipid, grey-toned noises inflict upon a still life painting with insects or batrachians as indolent subjects.

They keep the pace down and treat noises with a dark ambient fetishism, so that “Vital Reaction” stylishly moves towards a fetal Steel Hook Prostheses sound. Sure, they accrue the level of reverberation and still maintain that barbaric lo-fi power-electronics, as if the slimy vaults of horror where we are introduced into have to breathe their spite as well. Imperceptible enough to alter your brains, this static fugue encapsulates our domestic surroundings into a monstrous absorbing apparatus (and reminds of the ancestral Vond horror atmospheres, this time set ablaze by noise frequencies) . The blatant anomalies adorning barren ambiances suffer eventually from aesthetic impotence; you just refuse to indulge yourself in this too polite suicidal despondency.

And when I thought these tattooed necrophiliacs have already trademarked themselves with filthy minimalist noise aerobics, a demoniac unleash of visceral, mind-subjugating textures begins to burst out in devastating tides under the name “Shredded Sky, Hung In Tatters”. Setting aside the black-noise projects, this explosion of corrosive drones exalts the turbulent souls in the way solely black metal fanatics could do it (I exemplify here with the latest Teitanblood Death), and surely reveals influences from the works of NTT or Strom.ec. Teeth applies a monochromatic palette of dark-reddish nuances smeared by brushes of pitch-black taint. Each detail, thought almost undecipherable in this mass of lava decanting, has its role to move the listener: figures racked by torment, grim and terrifying territories setting an impressive trap for our mind that finishes by feeling absolved of any further desire.

Malignant has proven to choose its artists with care, and there is no exception here. Apparently, the elaboration of “Lacerate” was based on very simple and annoying noise rumblings that soon would have been transformed into a flatulent harsh noise having no possibility of cure. Instead, Teeth…demonstrates once again their authentic style, by the blending of contrasting colors and especially by their transitions from static to subtle melodious alterations. Such shrewd practice of electronics, that has affinities with Burzum’s Filosofem and even with tremolo pickings favored in the contemporary extreme metal scene, technically as well as from an aural perspective, is unquestionable evidence of the project’s maturity and authenticity, despite its recent birth.

Their modus operandi acquires an irritating effect of aliveness. When hearing “Broken From Inside”, there is a neurotic risk that you really come to feel and touch the consistency, intensity and the smell of these metaphorically smashed innards. Force-fed electronics and animalistic vocals squeezed all along a background made of nude hatred ambiance.

You once must have felt a sensation of menace and despondency at nature’s indifference and force when a storm was about to burst. What if perspectives were changed and you approached earth from above together with the blowing wind and heavy rain…”When Storms Come” is the song closing the record and it seems like a photography taken from above. Through the thick and densely patched air the earth, our transitory home, is no more than a planetary-scaled cemetery, where on every grave’s epitaph the word ‘resurrection’ has been erased.

If everything has been consumed in the desire of attaining catharsis, but in the end you are again conscious of failure (of being still you), nonetheless you could attempt in doing somehow the opposite. Let starve the fires like these deathscapers have done, on this one of a kind record the thematic of which is resumed and will be resumed by genuine noise-keepers of the century.

Teeth Engraved With The Names Of The Dead ‎– Starving The Fires (Part I)
Malignant Records, TumorCD74
CD 2014