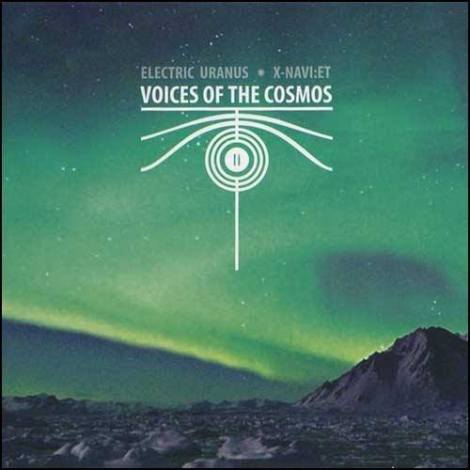 The Northern Lights have been recorded during a live performance at the Planetarium and Astronomical Observatory in Grudziadz, Poland, on the 8th of May 2013. The Voices Of The Cosmos that have captured these sounds are two human mediums, Rafał Iwański (X-NAVI:ET) and Wojciech Zięba (Electric Uranus). They used radio telescope sounds of aura and magnetosphere combined with the more commonly digital treatment.

It would not be a surprise if this type of music were to be documented in the future as proto-tech classical music or in some other dystopian denomination. The “Northern Lights” track sets the framework of a robotized lounge/ rhythmic musical scenario, interfacing radio frequencies, alien loops and digital beatings. Pleasant enough for the background of a science-fiction lecture; even more likeable for laboratory entertainment.

Voices Of The Cosmos collects sound sources of extraterrestrial origin with an entomologist’s meticulousness and redefines them in an artistic ambiance through the use of effects. “Geomagnetic Storm 1” sees the interference of chiseled violent loops with a strong visual outcome. And how graciously “Solar Wind” fascinates by its ballet acrobatics of revered tardiness and danceable flattering… only to change into the suspicious, unnerving frequencies of an immeasurably distant “Geomagnetic Storm 2”.

The metamorphosis of cosmic sounds into human -friendly music has been practiced in other cases of spectral transformations of noises. Voices Of The Cosmos displays a discretionary objectiveness allowing a direct compliance from the part of the listener. “PSR B1933+16” and further on “In Aurora Point” intercepts an aural sonic gesture that joins listening and comprehension into a single act of gratification. Whether this is pretentious or not, the track suffices to dissolute the argument.

“Solar Activity” receives a potent audio cartography, all the more visualized as its attachment to such an endeavor forces us into astronautic dreaming. Body and mind mingle into a sonometer, exhuming silence out of mud.

All the responses the cosmos has given us are shaped into sounds and images. The same goes for our questions. Such as this following track, “White Dwarf B”; despite of scientific proof, man is still vegetating in his acceptance of a paradigmatic astronomical system. The enigma implied here, and suggested in such a raw manner, amazes.

The “Silver Star” is what remains to us as an idol and point of reference. A positive neglecting pentagram whereupon man is crucified and dignified. A musical piece that renders the cosmic climbing of an atemporal Golgotha.