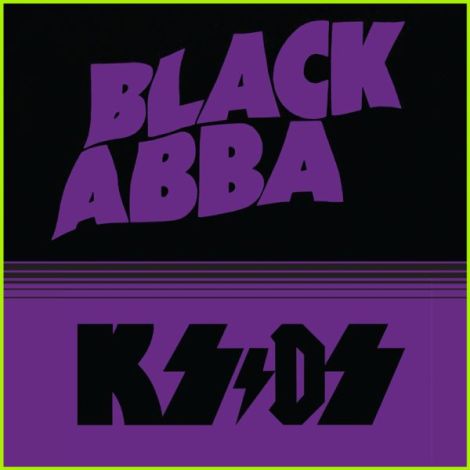 With a cover that references Black Sabbath, AC/DC and Kiss, KSDS (whomever they happen to be) make their debut in a surreptitiously disquieting manner. Imagine if you will, walking through a condemned building setting the charges. The framework is rotting, the windows long gone and whatever wiring remains is a deadly combination of exposed copper and hissing current. ‘Black ABBA’ is the soundtrack to this experience, because there are too many variables to even try keeping track of. You move to the insulation with your crowbar and, mask firmly affixed to your face, begin to rip it apart. The finite particulates waft out from the destruction, immersing you in a poisonous draught of asbestos and plaster. But you keep at it, never wavering and never knowing what is going to come next.

KSDS, through their usage of what sounds like synthetic voodoo are the ones who conjure up this kind of vision effortlessly. This is modular experimentation gone to the extreme and once more, in these dishonorable days of popular culture becoming the standardized norm all over the world, another act have pushed beyond the threshold of what could be considered music to create their own version of it. The architects of this record knew all too well what they were aiming for, they honed in with terrifying precision on a patch of fallow ground and then proceeded to sow it with malevolent glee. What did they plant? An album like this.

There are seven pieces on ‘Black ABBA’, two of which go above the fifteen minute mark. The shorter compositions lull you into a sense of false security making it feel just merely strange, oddly reassuring you could say. What those lengthier ones do I don’t even want to put down in print, you’ll have to experience it for yourself and when you do so try not to make a sound. They’ll hear. The label KSDS call home are transforming the musical landscape around them into a battlefield, making their listeners choose to either remain complacent or step out past the guard rail into whatever lies beyond. No one I’ve played these releases for has come away bored, some have retreated into their shells while a few others made the transition quite seamlessly.

Again and again these unknowns have shown up to batter at the barriers of consciousness and restraint, with an entry like this Osmiroid’s imprint draw that line in the sand even deeper as though daring even the gutsiest enthusiast to cross it. ‘Black ABBA’ is just one more weapon in the arsenal deployed against commercial stagnation and the assault of social media’s all-intruding eye.