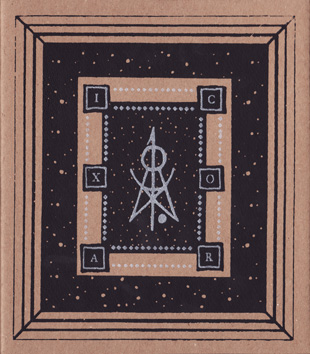 I.Corax has been part of the Helixes collective since its foundation and has two members, AIH, also the vocalist and guitarist for Dolorian and JKV, that have released two individual records on Freak Animal. The members biography alone translates to the expectation of an exquisite musical experience.

The presentation sheet from the label informs us that the present material is a compilation of older unpublished compositions dating from 1999. Therefore we are dealing here with the inception of the mystical quest of these two artists: the dawn of their musical and esoteric experiences.

As mentioned in the booklet the range of instruments is deliberately minimal. I.Corax reduces the material spectrum in order to amplify at maximum capacity the silencing effects transmitted by the sparse musical panoply. “Hunt”, the debut track of the record, almost disintegrates at each pace marked by the sound of a distant hit of drum. Besides that, eerie frequencies evolving without any center, as if deprived of gravity, appear in our hearing range only to sustain a tide of male chorals. The artists are only mediums for their inner personas. In the absence of prey they hunt on themselves. Regardless of the trodden path they look solely for what opens inside of them by the means of external symbols. As hunters they use murder to eliminate anything that prevents them from attaining their goal.

Far from common Christian acknowledgement, obedience and humility represent values symbolizing the departure from a constrictive ego, but also an integration into a hierarchical understanding of existence. “Kneeler” recreates an obtrusive sensation of imprisonment where the dungeon is the very self. Iron chains, spiderwebs, whistling ghosts and all-pervading drones, a stone-heavy deadness that stiffens soul and flesh alike. The one who kneels acknowledges his futility and prepares himself to die as a person. Once free from himself he can escape from this self-created prison.

A physical place of spiritual significance works as an intermediate between the worldly and the mystical plane. This is the main function of a naos, that separates the pronaos from the altar in a temple (or other worship place). The naos is meant for the voyage of the spirit and acts in terms of psychological and spiritual transformations. This third track, also named “Naos”, depicts such a journey: from the profane towards the sacred. Fluctuating drumming pointed by silenced grinding echoes and whispered warnings or advices: the body wanders in chaotic despondency until it finds the equilibrium. The sound is oppressing and slightly heterogeneous: the music moves like the seething body of a snake. It leaves behind viscosities that reach your nostrils. Like one walking in a tunnel and abandoning his past. This naos may very well have a forest as a point of reference, considering the trips the artists might have taken from town to forest where they could complete their rituals. Whether they have reached the altar should not be my concern – though I strongly believe they have.

On the altar the victim is being sacrificed by fire, knife or symbolically in the manner of transubstantiation. It receives another shape and form and is being sanctified by this very act of dispossession of the old self. The altar connects this existential plane with the above – even etymologically the word ‘altar’ derives from altus (high). The way a man’s persona is defined by some philosophies as a rapport between things and beings, therefore a connection, so that he acquires significance in the metaphysical world as a connection intermundus, a nexus or a gate. He is Janus observing both worlds at the same time, usually incapable of leaving one of them. Such reflections incubate upon my mind on listening to the final track, “Nexion”: calm and haunting indecisive extra-terrestrial sounding loops of déja-vu curves and globular masses, concomitantly imprisoning and letting go of your mind.

I.Corax invite us into the intimate chamber (cella) of their phantasm reinterpretation of this physical, delusive reality. The sound medium seemingly operates in delicate indifference, yet intrusively and subliminally taking possession of the listener’s mind. You should totally open yourself to this offering, perhaps at times realizing the mind that crafted this ambiance is the same mind that listens to it.