“My paintings explore the optical effects of linear distortion and arithmetical progression. The patterns and colours used are carefully selected to create either an optical illusion of movement, or to create a feeling of tension on the surface of the painting.” [http://www.hvaf.org.uk/Pete-Greening/gallery]

How would you summarize this past year on artistic and personal level?

2013 has been a good year artistically, starting off with the 2nd release in Drone Records’ Mind-Drone series using my paintings on the cover (see http://www.dronerecords.de/album.view.html?album=14958) and ending with the preparation for the 3rd release in the series. In between I had my most successful exhibition of paintings to date, and have also sold stuff from Redbubble (http://www.redbubble.com/people/petegreening)

On a personal level, I’m still alive so it can’t have been a bad year! I don’t think there was anything that stood out to make it different to any other year

What album you listened to most often this year (not necessarily released in 2013)?

The album I’ve listened to most this year would be either My Cat is an Alien’s ‘Greetings From the Great Void’, or Coil’s ‘Queens of the Circulating Library’ ‘Greetings…’ is typical My Cat Is An Alien (a band that I resisted listening to at first because I thought their name was silly, but then when I finally did hear something by them I had to backtrack and find as much of their music as I could!). I’ve been into Coil for many years – since the mid-1980’s – and they are definitely the band I listen to most. ‘Queens ..’ is probably my favourite album of theirs – one long, gentle, droney track that when it’s finished is very hard to follow up with any other music

What was the best cultural experience not related to music?

I’m lucky to live near London, so with only a little effort I can attend major and minor exhibitions and concerts, and visit museums. Having said that, I sometimes don’t make enough effort, and miss out on things that I would have liked to have seen.

I discovered the art of Eduardo Guelfenbein (http://www.guelfenbein.com/) – well worth a look, although as with all of these web sites the works are much better ‘in the flesh’ than on a screen.

I went to a museum dedicated to William Morris, the great Arts and Crafts designer (http://www.wmgallery.org.uk/) – beautiful patterns for textiles and wallpapers, and craftsman-made furniture

I also saw the David Bowie exhibition (is this allowed as “not related to music?) at the Victoria and Albert Museum – although I’m not particularly a Bowie fanatic, I really like Low, Heroes and Lodger (Probably because of the Brian Eno connection). The exhibition was ground-breaking in that you were provided with a wi-fi set that gave you information about the exhibits when you stood near them

And best trip? Most beautiful or magic place you visited this year?

Eeek! This is where I have to admit I don’t travel very much! However, I can find beauty and magic in many things – whether man-made like the colours of bricks in a wall, or natural like the way fungi grow on old tree stumps, and a place or thing can be magic one day and then very ordinary the next.

What was your greatest disappointment of 2013?

I went to a Hawkwind gig in London in August and had to leave before they came on as I was feeling too ill to stay.

Hawkwind were a staple of my youth – between 1970 and 1978 if they played anywhere within easy reach, I was there! Then a mortgage and responsible life-style came along, and my taste in music evolved far enough so that while I still retain a love of their earlier albums, their later music seemed formulaic and uninspiring to me.

Did you learn anything particular this year?

Life is one long learning experience!

The 3rd release in Drone Records’ Mind-Drone series (Stefan told me that he plans 25 of them, but at a rate of one a year I may not be alive to see the last ones come out!). I already have tickets for a Hawkwind gig in February, where they will be reproducing their famed Space Ritual which I saw many times in the early 70’s. Plans are being made for my first show of paintings in London. They are not yet finalised so I won’t say where.

Hopes – that the exhibition goes ahead and is successful!. I’m retiring from my “real” job in August, (painting has never paid enough to support myself and my family) so hopefully will be able to dedicate more time to my painting. I also hope to visit the Fondation Vasarely in Aix en Provence (http://www.fondationvasarely.fr/uk/foundation.php). Vasarely is one of my artistic heroes. 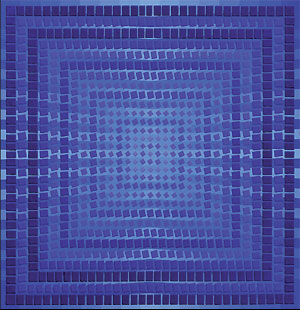