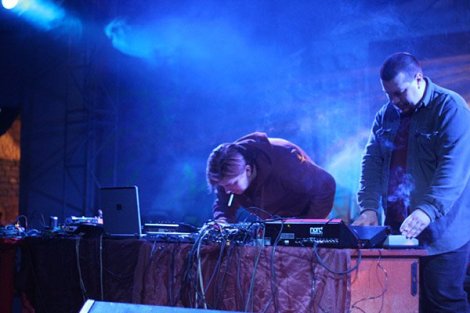 “Reutoff is a prominent post-industrial project from Russia. The trio founded in 1998 has developed its unique style blending elements of dark ambient, hypnotic drumming and heart-felt melodics into sophisticated sound that transcends the limits of so called Schwarze Szene. Reutoff, named after mystic sattelite town of Moscow, gives voices to terrible enlightments, breathtaking suspicions and the truth of Russian landscape with recognizible infernal irony. Project discogrpahy numbers more than a dozen of releases on such labels as Ewers Tonkunst, Hau Ruck!, Drone Records and the quest goes on. Reutoff collaborated in studio and played live with such significant projects of independant muzak as Deutsch Nepal, Troum, Bad Sector, Der Bluthatsch, Aube, Sal Solaris to name but a few. Every Reutoff piece of work is an adventure with unpredictable ending.” [Reutoff’ Reverbnation]

How would you summarize this past year on artistic and personal level?

Arnold_pR: Absolutely normal year. Not better or worse than others. If you look closely, it becomes clear that nothing can change. Time is a convention, and a change of scenery does not change anything. And every year the same.

WoWa BT: In general philosophical sense, Arnold is right, I suppose, but for me some different was. It’s difficult to separate artistic and personal level. In sum in the past year, I realized some important things for myself, tried and threw some new aspects of existence in music and found some way for keep moving. On the other hand, the same one can be said of any year, while you stay alive.

What album you listened to most often this year (not necessarily released in 2013)?

What was the best cultural experience not related to music?

Arnold_pR: Undoubtedly, this is Peter Pavlensky, “contemporary artist” who nailed his scrotum to the cobblestones of Red Square. This act worthy of perfect imbecile shows that such a “culture”, and how to relate to that word.

WoWa BT: Some books, some movies… honestly I don’t remember anything exceeding the “enjoyable entertainment” level.

And best trip? Most beautiful or magic place you visited this year?

WoWa BT: I think for Reutoff best trip was trip to ZugZwang festival in Darmstadt. We played with great musicians such as Troum and Rapoon, saw our old friends from Troum after many years and met many wonderful people. Another fun trip was to Volgograd, there also happened interesting meetings.

Arnold_pR: I also went to the Crimea in the summer, and managed to find there where absolutely no people – it was amazing.

What was your greatest disappointment of 2013?

Arnold_pR: No disappointments. I have not fascinated, so all of my disappointment is in the past. I see too clearly the reality and realize prospects to experience the illusion. Everything is shit. Me too.

WoWa BT: There is nothing to add. Except the disappointment caused described situation, perhaps. It would be good to have some reserve for disappointment :).

Did you learn anyting particular this year?

Arnold_pR: I already know too much, so much that I would like to forget anything. However, this failed too.

WoWa BT: No more arcane knowledge. “Yeah-yeah, I was reading it on the internet too…” Too many people, too many information. Better keep quiet.

WoWa BT: In 2014 we will release a lot of Reutoff stuff : our split with Sal Solaris “Eigengrau” on CYCLIC LAW and reissue of all ReutRaum 7” on CD with bonuses. Old Europa Cafe will release tribute to Reutoff called “Eidolon”. It will include covers and mixes of Reutoff’s compositions by Desiderii Marginis , Antlers Mulm, Troum and many more and Deutsch Nepal/Reutoff collaboration track. Also, we plan to complete our collaboration album with Deutsch Nepal.

Arnold_pR: These are our plans. And there are no expectations. Hope is stupid, do not hope for that. No hope. Hope ended.