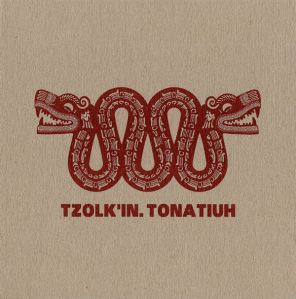 Under this moniker you can find two artists from projects appreciated in the underground scene: Flint Glass and Empusae; Gwenn Trémorin and Nicolas Van Meirhaeghe assumed the roles of musical archeologist with the mission to explore South American pre-Colombian traditions. This record, released by Ant-Zen in 2010, is made up of 7 portraits of the most important Aztec deities.

Tzolk’in slowly built a name in the scene by composing relaxing and epic electronic songs. The elegance and perfectibility in manipulating electronics and playing on distortion effects should be remarked from the first track Tonatiuh (the sun god). The two artists excel in finding the most appropriate sound effect and rhythm in connection with the content of the track. I would imagine a severe and solemn image for Quetzacoatl, a sort of Mesoamerican messiah, an image that the epic electronics seemed to fail in representing. And so the skill of the composers is all the more significant as they are able to vivify through a couple of bass tones and superbly moving distortions the figure of the ‘feathered serpent’.

With the song dedicated to the god of Mictlan (Aztec underworld), the music is reminiscent of the two-record collaboration project, Camanecroszcope, even if here the melody is much brighter and organic. It precedes a depiction of Tezcatilpoca, on the same pattern of evanescent rhythmic electronics, nuanced by key effects and a male chorus.

Tlazolteotl evolves from a bizarre evocation to a tribal beat made from slow-dancing percussions. It easily evokes a lascivious aspect because of the body movement force of the music in connection to the character of this deity (goddess of sin and purification). Amongst the terrible gods, from a ceremonial aspect, Xipe Totec is being offered a composition very similar to tribal praise-dances. It seems that the musicians intended here to put into music the peaceful side of the Aztec deity (as god of agriculture), leaving perhaps the portraying of Xipe Totec as god of war to extreme metal bands.

The record ends with the figure of Nanahuatzin, which is verily a sublime legend in Aztec mythology. The god would sacrifice himself in fire in order to shine forever on the sky as the Sun. The music, in terms of progression, follows this moment of passing from self-sacrifice to golden resurrection, and you can hear from meditative ambient up to more and more rapidly paced trip-electronics, the whole ending in an aura of ethereal stillness.

“Tonatiuh” proves to be an original illustration of the most important deities from the Aztec pantheon. Tzolk’in’s intention is not to offer some cheap and shallow meditative support, such as can be found in tourist souvenir music, nor to shock the audience by visualizing terrific aspects of this mythology, altered by old Christian misinformation. The music’s force of suggestion relies on an accurate and personal intuition combined with an exceptional mastery of melody.