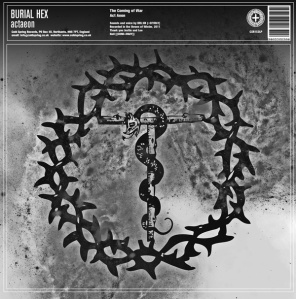 In 2011 Burial Hex and Iron Fist Of The Sun released a split LP in 500 copies through Cold Spring, which consitutes an utter sonic pleasure for all those committed to noise industrial and power electronics. Although both projects are relatively recent – they have only been active since 2007 – they’ve managed to make a name for themselves in the scene, and have manifested their work through numerous releases.

Behind the moniker of Burial Hex is American artist Nathaniel Ritter (Kinit Her and Circulation Of Light among others), who apart from the music has also created the cover for Burial Hex’s side of this LP. Ritter is a student of philosophy and religions and has stated that through his work he is trying to break the hardened shell of atheism and nihilism that surrounds this era. Surely the cause justifies the means, and this is maybe the reason why Burial Hex utilizes every harsh sonic weapon available in his arsenal in order to pierce through the barriers that entrap the spirit of man. The first track of the album, “The Coming Of War”, sounds almost like an invocation or a prelude to something dreadful, and this is exactly how the track evolves. In the beginning we have some down-tuned percussive sounds and a shrill layer of noise accompanying the heavily distorted and dramatic vocals, which in its peak gives way to a calm but ominous soundscape, almost like a field recording with wolf howlings, that leads to a melodic and soothing ending. But make no mistake, this melodic approach won’t last for long. The second track, “Act Aeon”, emerges full with hellish vocals and a metal-junk background to evolve again through a small silent interlude to a rhythmic death industrial piece. In this way Burial Hex’s side also ends, having lead the listener through a desolate battlefield to a place of emptiness and despair. One has no other choice but to surrender to the torment that is next going to take place in the hands of Lee Howard and Iron Fist Of The Sun.

“This Man Will Glow/Two Circles Of Salt” begins almost immediately with an analogue power electronics loop that provides the layer for the evolving sounds of the oscillators and the distorted vocals. IFOTS utilize a more minimal approach in their compositions and so we find the next track, “Hessianmud” constructed on a looped melody that contrasts with the harsh vocals. This track is almost like a short interval where the listener has the chance to take a breath before the death industrial burst that is “The 5th Wife”. Here we find more repetitive sounds and a lot of feedback both on the loops and the vocals. The sound is mostly based on low frequencies and the rhythmic approach of the track provides the perfect base for its violent temper – my favorite on this side of the LP for sure. In the end we have “Grown Under Ice” where the ambient facet of the project takes the upper hand, to close this work with a synth drone that fills the background, while desperate vocals and distorted sounds provide the path for the conclusion, which can be nothing else but obliteration.

Among the multitude of releases in the genre, this one really stands out. Although each project paints its sonic canvas in a different way, they manage to blend their individual vision harmonically and provide a solid and homogeneous atmosphere, also expressed in the album’s artwork. For both the Crowned and Conquering Serpent on Burial Hex’s side, and the distorted version of the mother’s embrace on the cover of IFOTS, demonstrate a single fact: on both sides of this release there is nothing but poison regarding everything that one may define as ‘normal’ or ‘comforting’.