Today we’d like to present the interview with Italian project called Antikatechon, which not so long ago gave the ambient world an excellent album “Chrisma Crucifixorum” – its review can be found here. We were talking with Antikatechon’s mastermind Davide Del Col. Have a nice reading.

Yes, Antikatechon means the intention to support the dissolving forces. It is a philosophical concept, so the interpretation can be expanded in many situations (religious, political, social etc.).

Is there any particular ideology standing behind Antikatechon?

There is an apocalyptic message that reflects my own idea about human corruption. With my music I want to create an epic and solemn scenario of the cleansing that must be done.

Which albums and artists had the greatest impact on you in the past and somehow formed you (at least in some part) as a musician?

I’d like to ask you about the idea of using the Latin language entirely, within Antikatechon’s activities. Why have you taken such a step and how is it related to the whole Antikatechon concept?

Well, I used the Latin language simply because I like it. I love dead languages. Latin is a very solemn language, so it is adapted to my atmospheres. But maybe in the future I will also use English or other languages.

Your debut is released by the Silentes label, which in my opinion is a perfect place for such projects as yours – what was the reason for you leaving Stefano Gentile’s label and joining the Polish Rage In Eden label which is mostly known for releasing martial music?

When “Privilegium Martyrii” was released, Silentes had many albums scheduled for release, so I preferred to also contact other labels. Rage In Eden is more oriented on Martial Music but that is not a problem for me. Marcin was enthusiastic about my music, and he immediately accepted to release “Chrisma Crucifixorum”, so I’m very happy for this solidarity.

In my opinion your music has something in common with Italian projects like Hall Of Mirrors, as well as with sacral Raison d’être-esque ambient. How would you refer to such comparisions?

I’m interested in melody and sacral concepts, but I also like structures based on drones, field recordings and death industrial loops. The consequence of this “duality” is to be connected to different styles of dark ambient. I am a fan of Hall of Mirrors but this project does not represent an influence for me, because it is a project contemporaneous to Antikatechon. Influences have to be searched for in my past, when I started to compose, and they are the projects I mentioned above.

How important is music in your life? Do you consider it more as a hobby, as an escape from trivial, day-to-day problems, or perhaps as something else?

Music is almost all of my life, not a simple hobby. It is the way I have to express myself.

I know that Giuseppe Verticchio was responsible for the mastering in “Chrisma Crucifixorum”. I have to tell you that I hold Nimh in very high esteem. And – to be honest – I can hear many similarities in sound between Antikatechon and Nimh or mentioned above Hall Of Mirrors. Could you tell me about the relationship between you and Giuseppe? Is it only on musical ground?

Giuseppe is first of all, a real friend. I have known him since, a dozen years ago, he asked me some CDr copies of Ornament, my first solo project born in 1999. He is a beautiful person and an artist with a huge personality. He made a very good mastering on “Chrisma Cruxifixorum” and he also engineered the sounds on “Privilegium Martyrii”.

According to Discogs, you are or were involved in many other projects apart from Antikatechon. Could you present in few words Rhetra, O Diabo De Vila Velha, Ornament, 30 Seconds Over Teheran, Echran, Molnija Aura and any others that elude me?

Rhetra is my black metal band in which I play drums. O Diabo De Vila Velha is just a moniker I used for some compositions inspired by 70s and 80s cosmic music. Ornament was my first solo project, started in 1999 and ended in 2003. Under this name I released 3 CDrs and a digital album. 30 Seconds Over Teheran was a collaboration with Paolo Romano (from the band I/O), we recorded some experimental tracks that were never released. Echran is my collaborative project with Fabio Volpi and Accursio Graffeo, born in 2003. We released two CDs and played live in various festivals. Molnija Aura is a cosmic ambient project in duo with Andrea Marutti. You forgot Nimeton Geist, but it is not a main project, I used this name for a tape release on The MGS records.

I think Italy has the strongest ambient and dark ambient scene in Europe. I can’t think of any other country which has so many great projects that correspond to my emotions in such a perfect way. But how do things look  “from the inside”? What’s your opinion about the Italian scene? Do you have any favourite artists or albums?

I think the Italian scene was always supported by important and inspired artists, from Maurizio Bianchi to Kirlian Camera, from T.A.C. to Alio Die, up until the more contemporary projects like Amon, Bad Sector, Nimh, Hall of Mirrors. I am very honoured to collaborate with Andrea and Giuseppe. If I have to mention some albums, I’d say “Solaris” and “Schmerz” by Kirlian Camera, “La nouvelle art du deuil” by T.A.C., “The Legacy” by Amon, “The Unkept Secret” by Nimh. 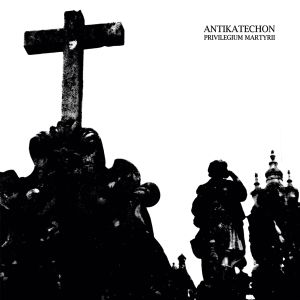 Perhaps you could recommend an unknown,  young Italian artist which in your opinion deserves some more attention?

Surely there is something interesting, but I have not listened to any recent music lately.

What was the most beautiful and inspiring place you’ve ever been?

Well, I think Estonia is a wonderful country, I like natural places, not as contaminated and industrialized as the town where I live in. In Italy there are many lovely places, I like Tuscany and Umbria, both extraordinary regions.

Are you interested in football? I guess you liked your national team performance during Euro 2012?

Yes, I like football, I played myself in the past and I am a supporter of the Udinese team because I have Friulian origins. But Here in Italy football is a real disease and it’s ruining the sport. Italy did good in the European Championship, beyond all expectations.

Any plans for the nearest future?

I just started to compose new songs for the next Antikatechon release, and I’m working to improve my drumming skills for future live shows with Rhetra.

Thank you for the interview!